A red herring...?  Or just a slap in the face!
Something new has come up.  Hunter has bright red cheeks.  This started (mildly) yesterday after his vaccination, so I just thought it was a low grade fever (which he sometimes gets after his shots) and I gave him Tylenol and Motrin.  The fever went away, but the cheeks have gotten rosier.  At one point around 9:30 pm it looked like Hunter had a bad sunburn.  You would have thought he was either burnt or severely frost bitten.  I was remarking how he looked like a angelic cherub with the rosy cheeks.
I had read a few things in the past that said rosy cheeks are indicators (and super tell tale signs) of teething.  We know his teething has been going on for a while, so it is kind of odd that the cheeks would only show up now, with his teething a reoccurring event since last month.  I went online (my favourite thing to do) and some mom posted that her son suddenly got these bright red cheeks after his vaccination.  I also read that there is something called Fifth Disease - commonly branched with MMR (Mumps, Measles and Rubella) and coincidentally that was what his vaccination was for.  (Perhaps that would be a reasonable explanation.) Now, I tend to go overboard on the research, but he has been a bit more cranky today then usual, but again who wouldn't be after a double vaccination??  I thought a picture would be more beneficial for you to see, but when I took the picture, his cheeks were less red then earlier on.  It seems to come and go, and when it comes, it tends to look worse then the last time.  Anyone hear of such a thing or experience this? 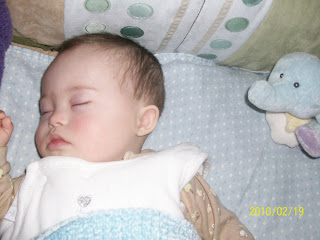 [Even while sleeping you can still see some redness in his cheeks]
I will probably add some more pictures later, when he wakes up so you can see the difference.  It actually looked like he has been slapped - which is why the nick name for "Fifth Disease" is slapped cheek disease.
Please comment below the post in the blog - and let me know what you think!  (I am sure there are plenty of Moms, Dads or caregivers who may have run into this who can pass on their wisdom and experiences.)
Email Post
Labels: Down syndrome Medical