Types of Down syndrome

The following is an article written by Stephanie Mamayson for the Canadian Down syndrome Society.  This article describes the different types of Down syndrome.

Types of Down syndrome
There are three types of chromosomal patterns that result in Down syndrome. They are: trisomy 21, translocation and mosaicism. A blood test is required for chromosome analysis and the type of pattern would be determined at that time.
Ninety-five per cent of people with Down syndrome have trisomy 21, which means there is an extra #21 chromosome in each cell. 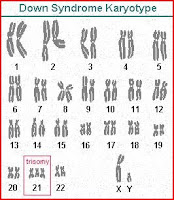 To view the actual article click the following:  Types of Down syndrome (This is a Microsoft Word document) or visit the CDSS page here.
Email Post