Wonderful Milestones happen when you least expect them to!
Yesterday Hunter had his E.I. appointment with Jenn, and we found out that he is still on track developmentally, and in range for his sitting, playing and speaking skills.  Jenn tells us that he is still within the "typical" infant development range which we were so very pleased to hear.  When we told Jenn about Hunter's newest task of sorting his toys and placing them into his bucket, she told us that the sorting skill is a 12 month developmental skill.  We were floored!  We just thought that it was something that Hunter had figured out how to do, and was having fun doing it!  Well, the fact that he chooses to sort his toys into his bucket, and acknowledges which side the bucket is on, specifically dropping toys into it despite what side it's on, was a specific skill.  Interesting.

Then something extra neat happened about an hour ago.... 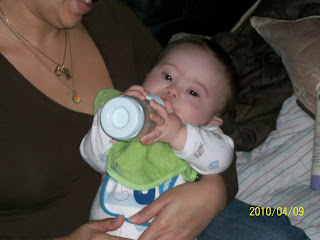 [Look Mamma, You don't have to hold it anymore!] 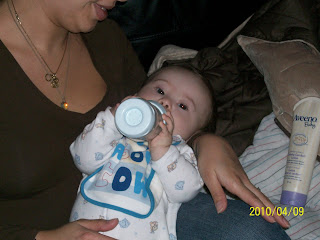 [Darn, I wonder how long she would have kept doing it for me?]
Here's the thing... I never gave him the bottle to hold by himself before tonight.  He's been holding onto my hand for the last few weeks, patting at the bottle himself, and also saying "Baw Baw..." specifically when he wants milk.  He has a ritual of things he does when he wants his milk.  First he starts out by saying "Mumm, Mummm, Mumma..." to obviously get my attention.  Then when we warm up the milk, he changes to "Baw Baw..."  I think this has happened because when we warm up the milk, we have been trying to pacify him by saying "the bottle is coming... and or milky is coming..."  I suppose I should have tried to let him hold the bottle by himself before, but it just never occurred to me!  Once again, silly Mommy!  Now, the test is to see if he will continue to do it alone, or whether he just wants me to feed him, despite the fact he can do it all by himself.
So, on that note, I think I should also make a note of how in the mornings, when Hunter knows that Daddy will be taking him downstairs, if for some reason Daddy is still sleeping, Hunter (all the wiser) has learned to roll himself over to Daddy, pat Daddy on the arm and say "Dadda Dadda Dadda!"  All I can say about that is, it certainly isn't my fault!  Now Daddy can't be mad at me for getting him up!!  Ha ha!  And honestly, how can you be mad at that little smiling face, waiting and wanting to see you every morning???  So sweet.
I am so grateful to also report that Hunter now sleeps 11 hours straight, from the time he goes down at night, until wake up time.  Occasionally he will wake up and want a bottle, after about 8 hours or so, and that certainly is no problem.  It truly is nice these days to have 8 hours of straight sleep.  What a wonderful feeling.  Yes, it does happen.  Not that before this, it was a problem, Hunter always slept at least 5-8 hours straight since he was a few months old.  Now it's a lot longer, and everyone is a lot happier!
Email Post
Labels: Down syndrome Early Intervention Milestones photos