Are you scared yet?
Today was quite the day of fright for one mother alone to handle.  I am the first to admit, having a baby is full of joys and fears.  Triumphs and failures.  Bumps and bruises.  Laughs and scares...  But honestly, two in one day.... I am going to go grey before this week is through!

Hunter is a child full of wonder.  I know I have said this probably on many occasions, and now that he is crawling around, I have gone around and checked little things that I think he could or would get his little hands on and more importantly put into his little mouth.  I thought I had done a good job, even reading the old fashioned toilet paper tube rule that says, if it can fit through the hole of the paper tube, it can be swallowed and choked on by baby.  So, I diligently went around a while back with a paper tube and while it may have looked quite strange, I was putting things up to the tube to see if they would fit or not.  I figured in our T.V. room, I had pretty well gotten anything and everything that a little hand could put into a little mouth.  I want to say, never trust toy manufacturers.  Not that I do trust anything at all, but I figured that a toy designed for babies, would be safe.  I know after today, I have learned my lesson.  Hunter, now capable of getting into his sitting position all on his own, and literally motoring around the T.V. room at lightening speed decided to sit in front of his play cube (a large wooden box with an abacus on one side, a wooden peg maze on the opposite side, a xylophone on the third side, and a magnet board with large fun shapes on the last side.  Even our E.I. had said the shapes would encourage Hunter's dexterity with handling the shapes, so no one ever thought that those shapes would cause a problem.  Hunter had been capable of placing the shapes onto the cube and then removing them for about a month now.  He would hold them up, examine them by looking and mouthing them also - a typical baby action.  Today, as I was cleaning the table our T.V. room, I hear Hunter whimper, and then let out a little cry.  I looked over at him, sitting literally about four feet from me with the red circle standing vertically inside his mouth.  He had managed to pop the entire circle into his mouth but because it was so large, he couldn't get it back out by himself.  And the more he tried, the harder he clamped down on the circle.  Now, you can't imagine how scared I was when I saw this circle in his mouth.  The circle is so large, that he would never have been able to swallow it, but the mere fact that he had it inside his mouth had me terrified, and obviously had him scared also.  I took it out of his mouth, and he let out a fretful cry.  I was so angry at myself for believing that this large circle was harmless.   It didn't fit in the tube by any means, and therefore I thought it wouldn't be "dangerous".  Now, after all was said and done, no harm had come to Hunter, and there would have been no way for him to have swallowed the circle, but getting this darn thing stuck in his mouth was enough for me to put those away, for a long long time.

Here are the pictures of the magnets. 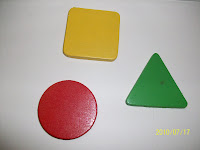 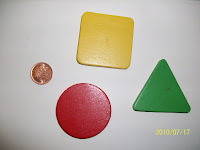 [I put a penny next to them for perspective] 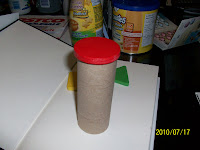 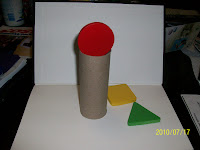 
Now, if that wasn't enough of a heart attack for me, Hunter the ever so smart and brave baby, decided that he would accomplish yet another new milestone for me tonight, but again, scared the "Crap" out of me while doing it.
I went up to our bedroom to change both myself and Hunter into our sleepwear.  Once I got Hunter changed I sat him down on his bottom in his crib, since the crawling has become an exploratory thing, I can't trust him on the bed for even a second with out me (and even with me he's so fast!).  He wasn't too happy to be in his crib while I was changing, but even through a protest, he managed to make his next milestone.  I turned my back to put my clothes into my laundry bin, and I heard "MAMA! MAMA!" very loudly.  I turned around and there was my son, standing up holding onto the front rail of the crib, leaning over it with one hand on the rail, the other reaching out to get me....  I swear I took one giant leap and yelled "Oh my Gwad!".  In the process of leaping to him, I guess I scared him too, and he fell backward.  He laughed at me and clapped his hands!
So there you have it, once again - our child makes yet another milestone of pulling himself to a standing position all on his own, and I missed it because I was putting laundry into my basket?!!  I know I will see it again, and honestly I knew he could do it, since he has been pulling himself to a standing position holding our hands everyday.  But, to see him do it all on his own would have been the best, especially catching the first time.  I wanted to put a picture here in the blog so you can see how he stands up with his hands on the rail, but I will have to do it tomorrow, when he's awake.  It was a good thing Hunter did this tonight, Lord only knows if he would have done it in the morning, to get my attention, and then toppled out of the crib as a result.  So, after that super episode, I got my tools out and lowered his crib nearly a foot down.  Now when he sits, he can just peek out, and when he stands, the rail comes up to his chest.  It will have to be lowered again probably sooner then later, since I am guessing it will only be a matter of time that he can swing a leg up and over....
Can you believe it?!  That's our boy.  Super star.   I hope he doesn't give me any more "heart attacks" though!
Email Post
Labels: Down syndrome Milestones photos Problems Too Funny