Inchworm, Crawling and now Sitting?
I guess it's true, things come in threes.  Just the other day, Saturday to be exact, I was packing my bags for our stay at a hotel this past weekend for my cousin's wedding.  While I was busy packing, Daddy was watching Hunter on our bed.  One minute I saw him on his belly the next I come back into the bedroom and he's on his bottom sitting up.  I made a comment to Daddy who promptly tells me, he thought I knew Hunter was doing this already.... He was?  Daddy had just witnessed Hunter transition from tummy and all fours to sitting!  How exciting... but yet again, I missed it. Boooo!

So, onto our weekend.  We had a fantastic time at my cousin Andrew's wedding, he was amazing and his bride Raji was beautiful as ever.  I was lucky to get a few (330) pictures of the event.  I have a few that I will post today, of what I like to call "The babies four".  I will post more later this week, as these first ones are from Grandma's camera.  My 300 pictures are on my professional camera, and I have to go through them all first.
While in our hotel room, we witnessed Hunter crawling on the bed, a great sight!  It is definitely a modified crawl, which I like to call the inchworm-commando crawl, and though it is funny it is definitely his newest method of travel.   Fast-forward to today, I brought Hunter down stairs to get him his lunch, and I put him on his hands and knees to play while I went into the kitchen to get his food.  I came back into the family room and was talking to Daddy on the phone.  I heard Hunter banging on his Leapfrog drum (which Aunty Melissa bought for him) and I hear him banging on it, but it isn't making any sound.  I remembered that I had turned it off last night, and I went over to turn it on for him.  Without even realizing it, I bent down to turn it on and walked back to the couch, and then it hits me.  Hunter was SITTING down with the drum in front of him.  I turn to look at him, (he's happy banging away now) and ask him, how did you do that?  I know I didn't put him down on his butt, I put him down on his tummy!  Well, I guess he's figured out he doesn't have to wait to show me that he can transition to sit up by himself.  (Side note:  all those PT sessions that we do with him, that Jenn showed us to do when she's not here obviously paid off.)  And with that, I am desperately trying to get this latest achievement of transition sitting on video.  He has been able to go from sitting to tummy for quite a while now.  I did manage to get the Inchworm-Commando Crawl on video, but you will have to keep in mind, I recorded it after watching him do it rapidly four times before, so in the video he is pretty tired of doing it.  But first, here are some pictures from Grandma's camera at the wedding: 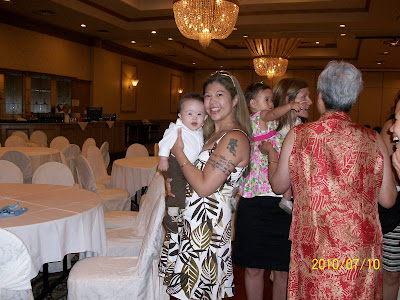 [I am having so much fun, this is my first wedding!] 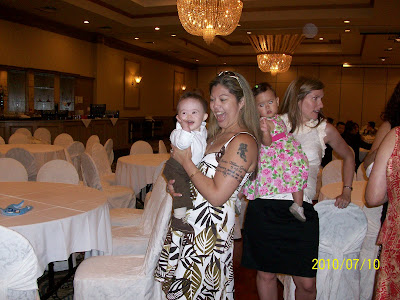 [Don't I look dapper!  And yes I was a good boy for the whole thing!] 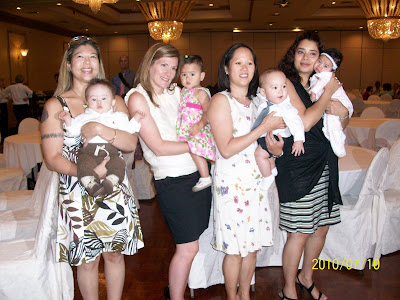 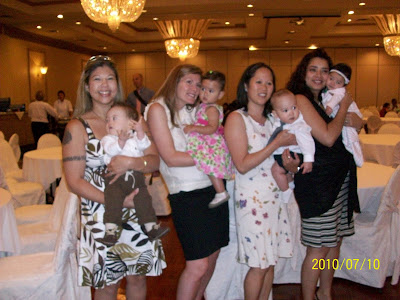 [Did someone say clap?  I was clapping for everyone!]
And here below is a video of Hunter doing his Inchworm-Commando crawl, to Grandma and Daddy.  The object he is chasing is his Playskool Horsey on wheels!  Crazy thing keeps rolling away....
And you wont believe this, as I am writing this entry, Hunter decides to try and sit again, and I had to quickly grab the camera to record it.  But as usual when Hunter knows he's being recorded, things come to a halt.  I got most of the attempt, and he got most of the way into sitting, but decided that he'd rather go back to his tummy.  Oh well, I will get the full version sooner or later for now, it's just the preview!  And in the meantime, you can watch these two cute videos!
This is Hunter's new way of getting around. It started off being just an Inchworm attempt. Then later he tried the Commando crawling. Somehow he merged the two and it became the Inchworm-Commando Crawl. Yeah for Hunter!
Would you believe I was actually able to catch an attempt on video? I asked Hunter to show me the sitting, and sure enough he did. You can additionally hear Grandpa in the background making his request too.  What a talented boy. Hardworking and obviously tired out from demonstrating to me for the last hour!
Hopefully these pictures and videos were worth the wait.  They were for me.  And, as promised I will get those other pictures from my personal camera posted as soon as I can.  There are lots of great shots of Hunter and Daddy.
Email Post
Labels: Down syndrome Early Intervention Milestones photos Video