Today was a fun day for Hunter, Grandma and I.  We went to cousin Judy's baby shower - oh remember when we had that day?  Seems so long ago, but really it was only 6 months ago!  Well, I was worried about Hunter's reaction to family that he hadn't seen for about 2 months, as he is now recognizing faces (or rather, the issue is when he isn't recognizing faces....).  For the early part, he was pretty upset, maybe a little over stimulated and a bit hungry.  But, he seemed to calm down and tolerate the rest of the afternoon after the 1st hour.  It's funny to watch him looking at other people.  But, once again - I am totally convinced that Hunter knows who is a recent mommy and who is out of practice! 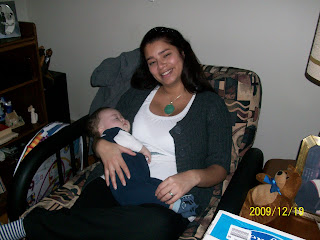 [Taina with a sleeping Hunter]

I noticed that Hunter was very quiet 'vocally' today though, so I am wondering if that is an early warning sign that he will be shy until he warms up to people?  I hope not....  Shortly after getting into the truck, mom and I endured a full blown "Hunter conversation" all the way home from Scarborough to Ajax!  And leave it to Hunter to have mom and I saying, "now why couldn't you be that talkative in front of the family?"  I am sure he was just recounting his experience of his first "hen party" otherwise known as a baby shower. 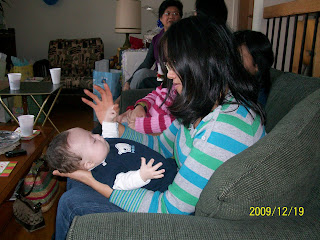 What did we expect - he was the only male in the whole house!  But, Hunter did save some smiles and laughes for Aunty Melissa at the end of the day.  (She knew the famous tickle spots, didn't she Hunter?!)  Now since Hunter had about an hour nap at the very end of the shower, (and I got a chance to eat and socialize - yay!) I am left with a wide-eyed not too sleepy baby for the rest of the evening.  Hummm, not to sure if the hour break I had will be worth it.  Guess I will find out in about 2 and 1/2 hours!

So while Hunter was only mildly gassy today, it hasn't gotten any worse.  I think that I need to put Hunter back on the baby cereal.  He's just too hungry on breast milk alone, and dare I say it - Hunter has woken me up two nights in a row at 4:30-5:00 am because he is slurping away, eating his fingers.  Now, at this point, he's not actually awake - awake, but he's obviously hungry because when I get him out of the crib and feed him, he goes to town like he's never eaten in his life!  So, I honestly think it is time to get back onto the cereal.  (Plus as a benefit, he does tend to sleep longer after having cereal at night.) 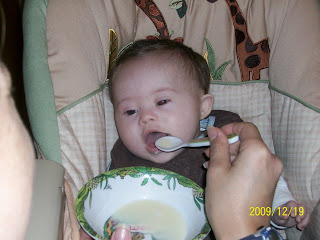 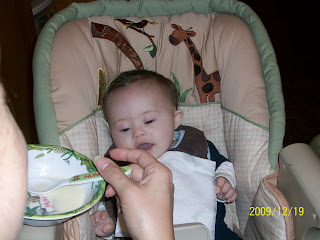 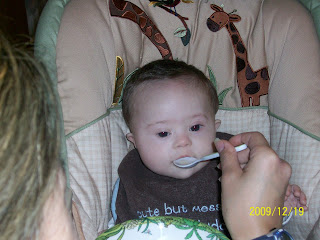 Since all of our shopping is done, minus two people who we had done but now have to re-do, Sunday should be pretty relaxing.  Monday we are back at it again, we have our E.I. specialists (Jenn & Kay - my lifesavers) over early at 8:30 am.  I hope Jenn will be impressed with Hunter's neck development.  It has come a long way. 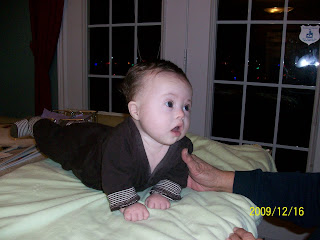