So, Count Dracula is still at it today, I don't know.  I don't recall watching Sesame Street when he was in the womb.  Well, I have to say, I am very happy that Hunter is not gassy any more (Knock on wood).  He doesn't cry in pain with gas as of last week, but he does fuss when it's time for a nap.  Boy he is just like mom and dad... he really fights having to sleep.  He can hardly keep his eyes open at times, and he mumbles away only to find that he has fallen asleep and startles himself awake if someone says something too loud (not knowing he's asleep!).  He's currently saying "ahhhhhhhhhhh ahhhhhhhhhhhhhhhhh - waaaaaaaaaaa awaaaaa" over and over....  It's kind of weird!  We hope and pray our kids will talk when they are little, only to hope and pray that they shut up when they are older!  It's cute though, he is just talking away, to no one in particular, over and over, we think he likes the sound of his own voice.  Why not?  I like the sound of his voice!

Something new though, since he's holding things now (all the time) he has learned to grab a hold of his own hair (better than mine!) with his left hand, and just hold it.  Perhaps he likes the feel of his own hair.  Maybe the texture?  His rings are passe now - same with Mr. Mushroom and Sophie the giraffe, although you may find him sporting one of them on occasion out of boredom. The swing is still a personal favourite.  I have never had so much time to myself... not too sure if I like it.  I am so accustomed to holding him for his and my entertainment, that when he likes being in his swing, I feel kind of guilty taking him out!  He obviously likes it, as he sleeps so soundly in it, for periods longer than 20 minutes.  I have to say - I know I am still so lucky that he sleeps through the night (6 - 8 hours ever since week 2).  Luxury.  So then, why am I so tired? 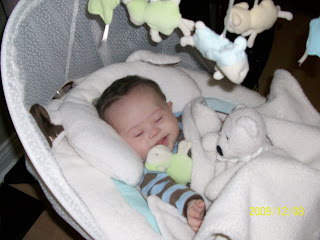