Lately I am finding that I always think to myself, 'I wonder what Hunter will do today?'.  Today (rather yesterday as now it is after midnight) was the beginning of week 23 - or is it the end of week 23?  I don't even know exactly how I am counting these weeks, all I know is that Saturday's mark new week numbers.  This one being week 23.  This is precisely why people just use month numbers after a certain point, but since I am keeping a journal, I find that I need to keep track by week, or I wont have a proper title reference.

On the 22nd, Hunter discovered he can use a sippy cup.  Yes, a sippy cup.  It's actually a training sippy cup, shaped and designed like one, with a rubberized spout instead of a hard one.  The cup instructs use for six months and up, but I figured since Hunter already knows how to drink from a cup, what's the big deal?  And, I was right.  Never put limitations on your children, they will surprise you.  If you allow them to do things that you think are impossible, they will, and they will do it well.  In his sippy cup we tried Heinz baby Apple Juice.  This too says start at six months, but I have been finding since introducing baby foods, Hunter is much more thirsty and also his bowels are a bit slow.  So, in speaking with the doctor, and consulting my handy-dandy books and Internet, I have been advised that watered down apple juice is the way to go.  Today he downed two ounces.  This baby loves new things.  Well, most new things.  And why not?  It has got to be so much better than tasting the same old booby milk everyday!  (I still breastfeed him the majority of the day and night with the exception of a 1/3 serving of Heinz or Gerber baby meal at dinner time.) 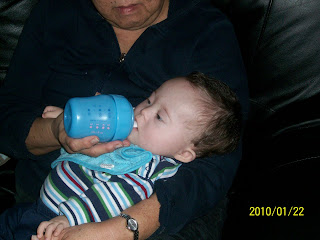 [Grandma helping Hunter with his sippy cup]
To end the evening tonight, Hunter had his bath, and yet another hair cut....  And, since last night was a disaster with bedtime, (Grandma rocked him to sleep at 10:30 pm, which totally put him out of whack) and Hunter woke up at 3:00 am, and stayed up until 5:00 am, I put him back to his regular bedtime schedule of midnight.  I am hoping that he will sleep until at least 5:00 or 6:00 am.  (I can always hope....)  We shall see how it goes this time.
Now, I think it's time for me to get ready for bed also.  I am extremely tired today, having been up so early!  Until next time....
Email Post
Labels: Down syndrome Milestones