What a great day today has been so far.  This morning, my tag team duo superheroes Jenn and Kay were here to fix up Hunter some more.  Hunter's kink in his neck has become much better since last time, he freely moves his head left and right now, but it still tends to get stuck facing right on occasion.  And, Hunter's weak neck muscles are still prompting him to tuck his chin down to his chest, but he's diligently working on holding his head up high.  He is however, doing some awesome tummy time things, and is now rolling over to his left and right!

Hunter is definitely reserving his smiles these days for those people he recognizes, and chit chatting in overdrive for those he loves.  He still pouts and perhaps sheds a few tears when confronted with someone strange or new, so if he makes "funny" at you, try not to take it personally, he is still doing it to Grandpa too.

On the book front, I have been speaking with my Early Intervention team manager Ellen, and I have officially signed a consent form for the Ontario Association for Infant and Child Development (OAICD) to "publish" my analogy part of the story.  For now, I have agreed to let them publish my work in the Durham Region newsletters and websites, in Newspapers and Magazines, in any Down Syndrome Association website, and anything else they can suggest to get the story out, and more importantly get people educated.

Something else that I have been working on is now also materializing with the OAICD's help (specifically Ellen, Jenn and Kay - my E.I. team) - back in November I had been asked by the YMCA Ontario Early Years Centre's management if I would like to spearhead a play/learn group for special needs children.  This came about when I had asked them if they had any such groups that Hunter would be able to participate in, in addition to the already existing programs that they currently run.  Unfortunately, they told me that once upon a time they did have someone who was running a program for children with Ds, but since her child was now a teen, it hadn't really been her focus to continue it.  Before I could even jump at the opportunity to volunteer, the manager at the YMCA implied that I would probably be perfect for such a task.  I couldn't agree more.  And so, I decided that in order to do this right, I would need help.  With that in mind, I called in my 'big guns'.  I am so proud and happy that we can put this together, I know that many people can and will benefit from this plan.  And while I may be responsible for getting it underway, without my superheroes and the 'Y', it wouldn't be possible.  Our next step is to meet together and discuss our plans and hopefully put everything into motion.

Lastly, today was another milestone day for Hunter.  Gerber baby food!  Carrots to be exact....  While the event was a messy one, and I am certain Hunter's insides are now a bright orange... he seemed to LOVE carrots!  This baby has no boundaries and is quite willing to try just about anything and everything.  That's my boy.  Good thing he likes the taste, because his smile captured on camera is worth a thousand words. 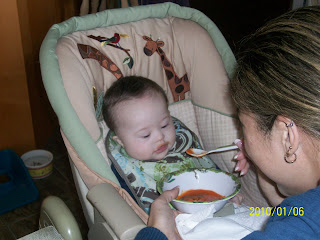 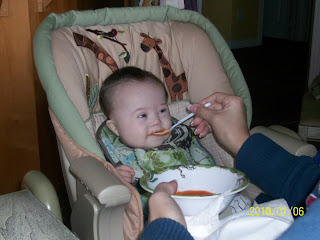 
And one last thing for the day - I just found out that my cousin had her baby boy this morning.  Congratulations Judy and Richard on your new bundle baby Alexander.  Welcome to parenthood, it's absolutely wonderful.