Hands and knees are for what????
Yesterday I promised that I would post pictures about today's wonderful play-date with my girlfriend Nikki and her son Chase.  Unfortunately since we got to talking so much (catching up like always even though it's only been a few weeks since we saw them last) and got too distracted and I kind of forgot to take new pictures.  Having said that we did get to go out for a beautiful walk, the babies got to chat and babble among themselves (how cute was that?) and Hunter got to see Chase crawl around and play with toys!  This was a huge benefit because I think after Hunter saw Chase crawling something clicked.  I have been saying on occasion that Hunter will get up on his fours and rock himself (usually on the bed or in his crib), sometimes going backward BUT today after Nikki & Chase left, I put Hunter down on the ground and he surprised me by getting up on all fours, rocking, and making small but definite progress moving forward!  Albeit most times he did this his forward momentum was a result of flopping down after rocking so hard, a few times he did rock himself forward a few inches!  It is obvious that since he was doing it so much today, and also staying up on his hands a knees for as long as he did, I predict he will be creeping or crawling along by the end of the month or at least before his E.I. Jenn returns for his next evaluation session on June 9th!  I can hope anyway!  It's a little thing like confidence that seems to stop him cold in his tracks.  Once he figures out that it will benefit him to actually go forward, look out - he'll be motoring away!  Right now the cutest and sometimes difficult thing to see is that he's trying so hard to go, and after expending so much energy trying he looks so defeated and frustrated that he hasn't made any progress with his attempt to reach or get to something he wants.  And he certainly lets you know that he isn't too pleased about the situation (while never crying, he can and will certainly grunt or yell out a displeasure!).

Here is what I was able to catch of Hunter on camera after Chase and his Mommy left us this afternoon.... 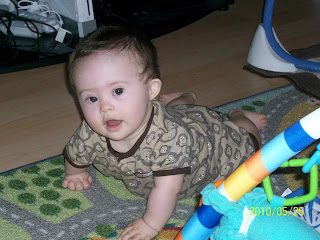 [This is how Mommy said to start off...] 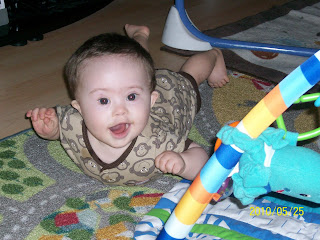 [Sometimes I still look like a seal out of water, rocking on my belly!!] 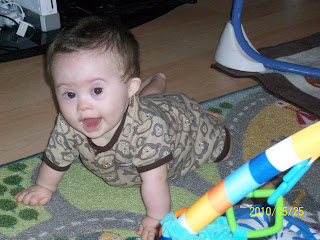 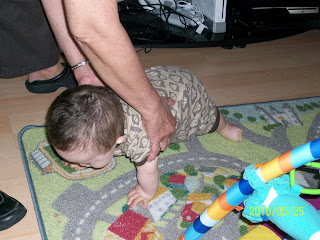 [A little help from Grandma does make it easier when I am tired!] 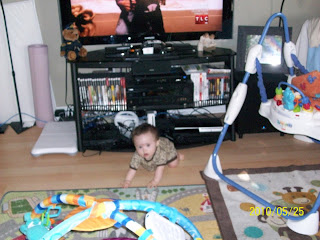 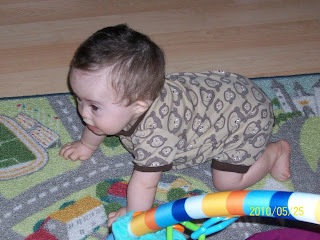 [What you can't see is how I am actually rocking wildly forward & back!] 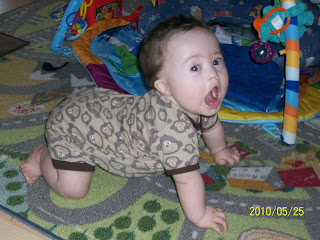 [Rooaaarrrrrr!  Wait... I'm not a lion?  Oh ya, those are Monkeys on my clothes!]
[So, now what?  I forget what Mommy said I am supposed to do next!]
Hopefully these pictures were worth seeing after me having forgotten to take some of the two boys together.  I know that there will be many more in future of the two of them, so not to worry!
Email Post
Labels: Down syndrome Milestones photos Too Funny