Did anyone say dessert?
It's been a week since I wrote.  A lot has been going on with me, pregnancy can consume a woman in so many different ways and unfortunately when it's nausea that overtakes you, it is hard to keep up with everything.  However, as a trooper I am persevering!  Despite doctors appointments and Hunter growing up right before my eyes - I had to sit down and get back at it - Blogging that is!

The nice, neat, new, NEWS....
Hunter had his monthly E.I. appointment with Jenn on Monday past.  We had wonderful and rave reviews from Jenn.  Hunter is developing so well, sitting independently and making the effort to crawl by getting up on all fours rocking and trying to go somewhere, (mostly backward but trying to go forward too).  He pivots around and even turns toward you when you call his name.  His favourite mode of transportation is still log rolling away so we have to watch Hunter like a hawk when he is on the floor!  He is saying Momma and Dadda specifically to each of us appropriately.  His cognitive development is extremely exciting.  He sorts items, throws "roll alongs" away from his Exersaucer for fun - boy do those hurt if you get pinged off with one!  He choses specific colour toys and he knows how to get and play with his Disney Baby Einstein music toys (Play-yard and Exersaucer) to hear his favourite song "Old MacDonalad".  (Out of 5 animal sounds and 5 songs, he knows the correct combination to press in order to hear the song he loves.)  He stands independently holding onto furniture and even took a micro step with Jenn holding him.  The thing I love the most is he is demonstrating such affection when he wants to hug us and he reaches out with his open hand to cup your chin and brings your face closer to his.  He pats you anywhere, lovingly.  He returns soft strokes.  He'll even give you five if you ask him!  All these wonderful things are so sweet but don't let him fool you, he can be a cranky monster when he hasn't had his two daily naps!  He now weighs 17.8 pounds and I'm not too sure but I think he is still 28 inches long.  We will get "the tail of the tape" on Thursday the 20th at Hunter's 9 month checkup.  Today, Hunter had his first two solid meal day.  Before today he was having milk for breakfast, milk for lunch, organic baby food for dinner followed by milk to wash it down and then one last milk before bed.  Tonight we added 1/2 a jar of organic fruits for dessert!  Yummy!  Hunter loved his blueberry/apple sauce dessert (so did Daddy and I!).

In my other world - the land of the Internet, I have been made the Community Leader for the Down syndrome Community on MedHelp's website.  I use my personal experience and knowledge to help, discuss and give answers to people asking questions regarding Down syndrome.  I enjoy being able to help people who have questions or just need some support with respect to Down syndrome.  It's part of my own "genetic make up" to live up to my name Sandi which means Helper & Defender of Mankind.

I am also currently six weeks pregnant with baby number two, and had a doctors appointment today just to see where I am at.  We have an ultrasound booked and a follow-up doctors appointment next week.  Knowing all of this, we are also looking into purchasing a second larger vehicle that can carry myself, John, Hunter, baby #2, and John's three other kids.  We had literally outgrown my Chevy Avalanche when it came to transporting everyone all together, but when we don't have my step kids, the Avalanche remains our primary vehicle.  So a friend of ours proposed selling us his Chevy Suburban (eight seater) which will solve our current problem when we are all together. 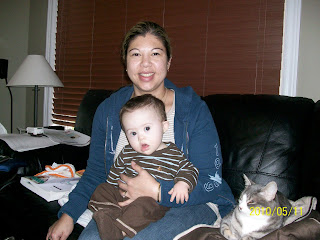 [Mommy, Me and the protector Twiggy cat.] 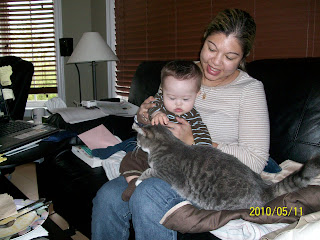 [Mommy says I am allowed to pet the kitty, but no pulling her ears!] 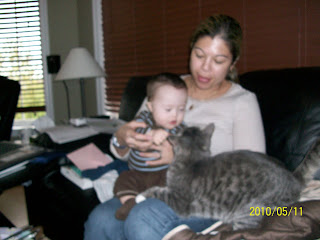 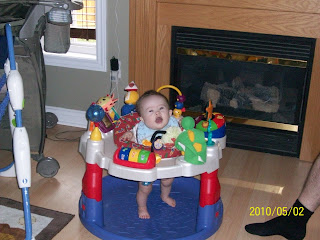 [How do you like my Exersaucer?  It was a gift from my friend Chase!] 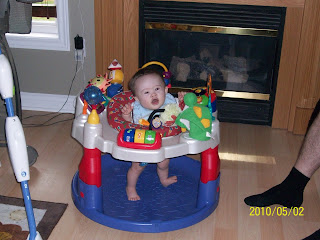 [I love free toys from my friends.  It helps me to learn so much & it's fun!]

In a nutshell, that is where we are all at!  Hope to be able to give you all more updates as soon as possible!
Email Post
Labels: Down syndrome Early Intervention Forum Milestones Personal photos Pregnancy update Update