A NEW UPLIFTING CARTOON CHARACTER...
who just happens to have Down syndrome! 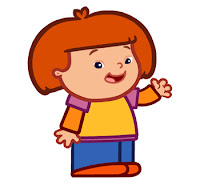 It was only a matter of time before the world would realize - Down syndrome isn't different....  "More alike than different" is the Down syndrome motto and it is becoming more of a reality than in past years.  Networks are working to introduce a new preschool cartoon character named "PUNKY".  Punky is not your run of the mill cartoon.  He has Down syndrome!!  Equality in every way now includes the cartoon world!!  The Ds world is very excited about Punky because slowly he gives children with Down syndrome a voice that says, we are just like you, even in cartoon-land.  When this cartoon hits the airwaves, it will give this new generation of preschoolers a view about Ds that the 80's generation got with "Corky" (Actor Chris Burke) from Life Goes On.

It's not just the cartoon world that has introduced Down syndrome into the view of the general public's eye.  Currently Sesame Street has several children with Down syndrome on it and at least one child with Ds is on nearly everyday.  Prime-time shows are now casting actors who happen to have Down syndrome, and they make the regular cast - not just stand in's or guest spots.  Take a look at Lauren Potter (Down syndrome Association of Los Angels' member with Down syndrome) - she plays Becky Johnson on T.V.'s hit show GLEE.  And WHY NOT?  1 in 660 babies born are born with Down syndrome.  A newer updated statistic (from 1:880) that makes a person more likely to have Down syndrome than a person to be born with red hair.  Interesting... isn't it? I thought so too, considering that Red hair occurs on approximately 1–2% of the human population (according to http://en.wikipedia.org/wiki/Red_hair) and the world's population of Down syndrome is at 2% and rising.

Take a peek here and read about this new character:  http://www.awn.com/news/cartoons/target-wins-global-rights-new-preschool-animation-punky

I am glad that parents and families who watch cartoons with their children, will get to see PUNKY.  Perhaps ideas will change when more people are exposed to the realities that Down syndrome isn't an unknown, strange or scary "disability" as some think it is.  Visions change when people are forced to realize that Down syndrome exists and they meet face to face with someone who has Ds.  Otherwise Ds is an unknown.  So perhaps this little cartoon child "Punky" will introduce Down syndrome in a way that is (of course) less threatening - being that he is a cartoon after all!